Heroku vs AWS: Selecting the Right Cloud Service for Your Application

AWS and Heroku — two of the most popular and pioneering cloud service providers. While the former is known as the industry leader covering 32% of the market, the latter brags a specific user base including startups and industry giants.

And while choosing the cloud provider out of the two you might have wondered: Which one, AWS or Heroku, is suitable for your application and deployment needs? Which one can give some serious bang for the buck? Which one might give a better edge?

Or are these two cloud services even comparable?

Well, just to answer your questions, we’ve done the dirty work of comparing these two providers. Here’s everything you need to know about Heroku vs AWS.

Let’s start with Heroku, one of the first cloud PaaS providers since 2007 that’s enabling super simple deployment, monitoring, and scaling apps. Or to say in the own words of Heroku “…it’s the fastest way to go from idea to URL”.  Now that statement is more than just romanticizing its value proposition because it exactly does what it says.

It works like a ready-to-move condo for your app with every amenity — without bothering to build or set up anything.

And if you think that’s not enough, let me tell you about the  175+ add-ons ranging from databases, messaging services to mail delivery — all with seamless integration for all the application needs.

This makes Heroku great for small teams and startups who don’t want to bother about infrastructure management. However, it works equally well with huge teams and enterprises. Thanks to the ease of collaboration, resource sharing, access control, and flexible scaling to support the enterprise needs.

Now, talking about AWS requires putting more flesh to the bone because, unlike Heroku, it is more than a PaaS provider.

Amazon Web Service (AWS) is a set of over 200 fully-featured cloud computing services. If you take a look at their massive offerings on the website, you’ll realize a scroll without the categorization would be never-ending.

While Heroku just deals with providing a platform as a service to deploy and manage apps, AWS plethora of services — computing, databases, networking & CDN, storage, developer tools, products for IoT, machine learning, game tech, and even Ground Station as a Service to control satellites and ingest data.  These are just a few from their product list.

In fact, Heroku itself is built on top of Amazon Elastic Cloud Compute (EC2) which an IaaS (Infrastructure as a Service).  And often EC2 is compared with Heroku while selecting the cloud provider. That’s illogical.

Remember, the analogy of a ready-to-move condo? While Heroku is a ready-to-move condo, EC2, an IaaS, is just like leasing land and building a house on it from scratch. An IaaS provides access to a cloud-based environment that requires you or the web development company you hired to install and set-up each resource manually.

Therefore, to keep the Heroku vs AWS comparison fair we need the right contestant and that’s Elastic Beanstalk, a PaaS by Amazon.

AWS Elastic Beanstalk is a PaaS that allows you to create and deploy applications. It’s an “easy-to-use” cloud computing service that makes deploying and managing applications pretty convenient.

You just upload your code and Elastic Beanstalk automatically handles the rest — everything from capacity provisioning, load balancing, auto-scaling to health monitoring. So you don’t need to bother about configuring the infrastructure as everything is automated.

But at the same time, you do have the control to configure the infrastructure resources if needed.

Beanstalk uses the different AWS services — Amazon S3, Amazon Simple Notification Service(SNS), Amazon CloudWatch, Elastic Load Balancers, and Amazon EC2 which means at any point if you want to migrate from the beanstalk, that process would be seamless.

Heroku has been in the market as a PaaS provider since 2007, four years before AWS introduced Elastic Beanstalk. And since then, it has been the preferred choice for easy app deployment and management.

According to data, Heroku is highly popular among small businesses and startups with teams of up to 49 members and revenue between 1-10 million dollars. However, the PaaS platform is also used by some of the popular names including Verizon Wireless, Kajabi, Unsplash, Calendly,  Reynolds & Reynolds, and SurveyMonkey. 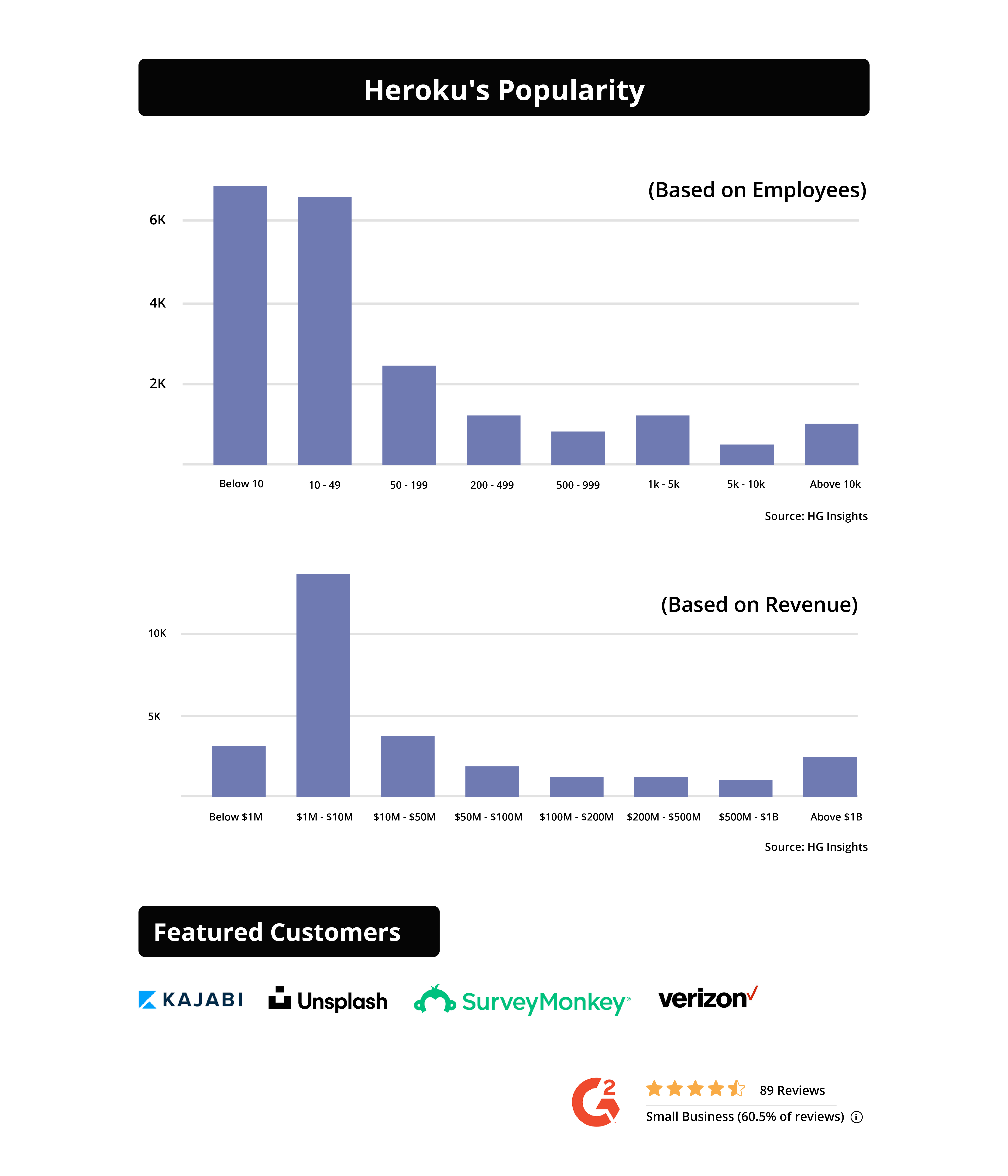 Meanwhile, Amazon’s PaaS is also fairly popular — although not as widely covering the market as its own EC2. AWS Elastic Beanstalk has a scattered user base among companies with different sizes— from small-medium teams to even those with over 10k employees and over a billion in revenue.  Popular companies using Elastic Beanstalk include Accenture, COX, BMW, Samsung Business, and OYO.

If we talk about the reviews and ratings, both Heroku and AWS scores fairly well. As per the user ratings on G2 Crowd Beanstalk scored 4.1 while Heroku is rated at 4.3, both with 89 ratings. 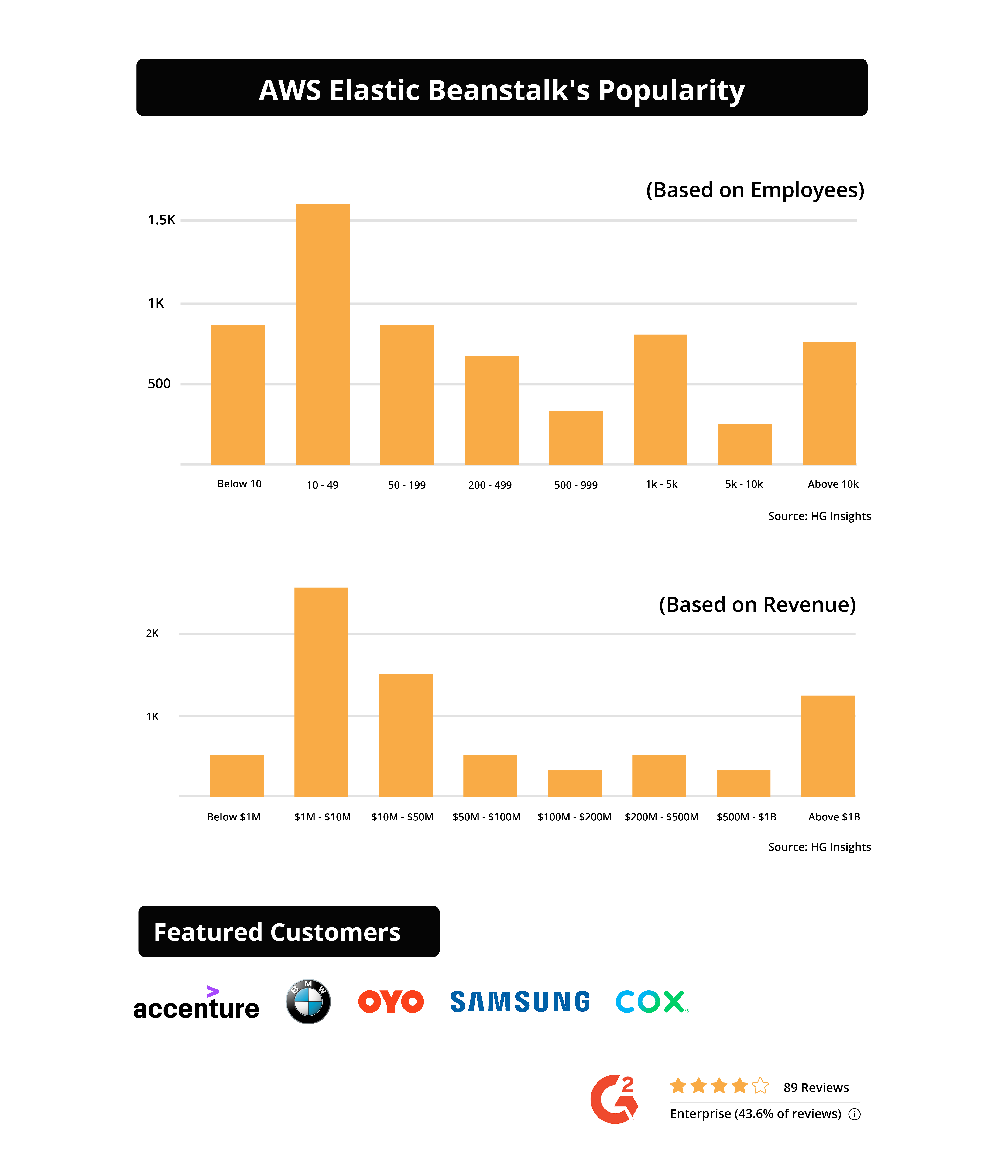 While both the services might have similar features, the way its pricing works can be a deciding factor.  Check it out.

Heroku comes with a free plan and three different tires as per the application needs and uses cases.

You can start with a free plan with a free dyno (Heroku’s server) in which you get 512 MB of RAM. Now that’s too low, but you can add an additional 512 MB RAM dyno for just $7 per month. This might be pretty good just to get started with your POC and MVP but once you generate some traffic, the application is bound to snap.

That’s when the commercial plan comes in — starting with the ‘Production’ plan with ‘Standard’ dyno costing $25-$50 per dyno per month.

Till now the prices might not bother you much. But upgrade to the next tier for apps with complex functionality, high availability, high volume, and concurrent requests — that’s where large price jumps are seen.

Elastic Beanstalk does not require any additional charges.

Since it works on other AWS services, you just pay for the AWS resources used and not the Beanstalk itself.

The resources used to deploy and manage your application include the EC2 instances with different CPUs, memory, storage, Amazon S3, etc.

Just like Heroku, AWS also provides you with a trial version to deploy your low-traffic app. Some of the services are free forever while some come for a limited time.

For example, 25 GB of storage in Amazon DynamoDB is always free while 750 Hours of Amazon EC2 or 5 GB of standard storage is free for 12 months.

Now, there’s no fixed calculation for Beanstalk as there are no upfront fees and you pay for the resources used on second, minute, or hourly basis. And the cost of running an application on Elastic Beanstalk may differ due to several factors. For example, the type and combination of Amazon EC2 instances, the bandwidth of your application, type of database and storage options, etc.

But the primary cost of running an application comprises the EC2 instances, Amazon RDS (database), and Elastic Load balancing. You may check the complete pricing of each service on the website here.  One thing to keep in mind is that while Heroku charges the service as a bundle and you have to upgrade to the next tier if you exceed the quota, with AWS, the prices stay fairly linear no matter how large you scale.

Heroku vs AWS: Ease of Use

Heroku and AWS Elastic Beanstalk both provide easy application deployment and management without bothering about configuration.

Just provide the app information, upload the application and these PaaS automatically handle the details such as provisioning, load balancing, auto-scaling, and health monitoring.

This means every service is automatically configured out of the box. And you can focus on product building rather than managing infrastructure.

Still, however, if you want to choose based on easy usability, Heroku is a better choice. Heroku is known for being beginner-friendly and super simple. And based on the experience and user reviews, Heroku has a lower learning curve than AWS which requires some knowledge before you can start working. Further, adding plugins from the 175+ add-ons and configuring them is also pretty feasible.

As discussed in the popularity trend Heroku is immensely popular with small companies with less workforce and startups. One of the primary reasons being beginner-friendly and minimal learning curve. And not to forget about the seamless integration of development tools.

All this makes it an ideal PaaS solution for individuals and small teams. Heroku allows you to put your maximum effort into building your product without worrying about the infrastructure. However, when it comes to scaling the app to support high traffic, it can get pretty expensive.

The substantial price jumps when upgrading to high-tier plans can bother growing businesses and apps with high traffic. This makes Heroku ideal for small businesses with less traffic but expensive for medium and large businesses.

Talking about AWS Elastic Beanstalk, it’s not only popular among small but also large businesses. The reason being it’s fairly linear pricing. Whether your app requires minimal resources or extreme to serve more traffic, there’s no drastic change in its price structure, making it ideal for even huge companies and enterprise needs.

As for other integration, beanstalk can seamlessly integrate with the numerous AWS services for monitoring, scaling, and management. While even Heroku provides you with 175+ add-on tools and services to deploy and manage your applications.

Heroku vs AWS: The Good & The Bad

Here’s a quick glance at the comparison table of these two popular PaaS.

Heroku and AWS, both have similar features. But one huge difference that can be deciding factor is its pricing. Heroku’s prices increase exponentially for higher-tier plans. While AWS’s “pay as you go” model keeps it pretty even. But Heroku’s prices are justified with its fairly simple app deployment and management compared to AWS.

So which one is suitable for your project. Well, here it is.

Heroku is ideal for you if…

AWS Beanstalk is for you if…

Looking for experts to build your cloud-based solution? Just drop us a line.