2018 the Year of React Ecosystem that Will Drive the Growth of Web, Mobile, VR and Data-Driven Apps 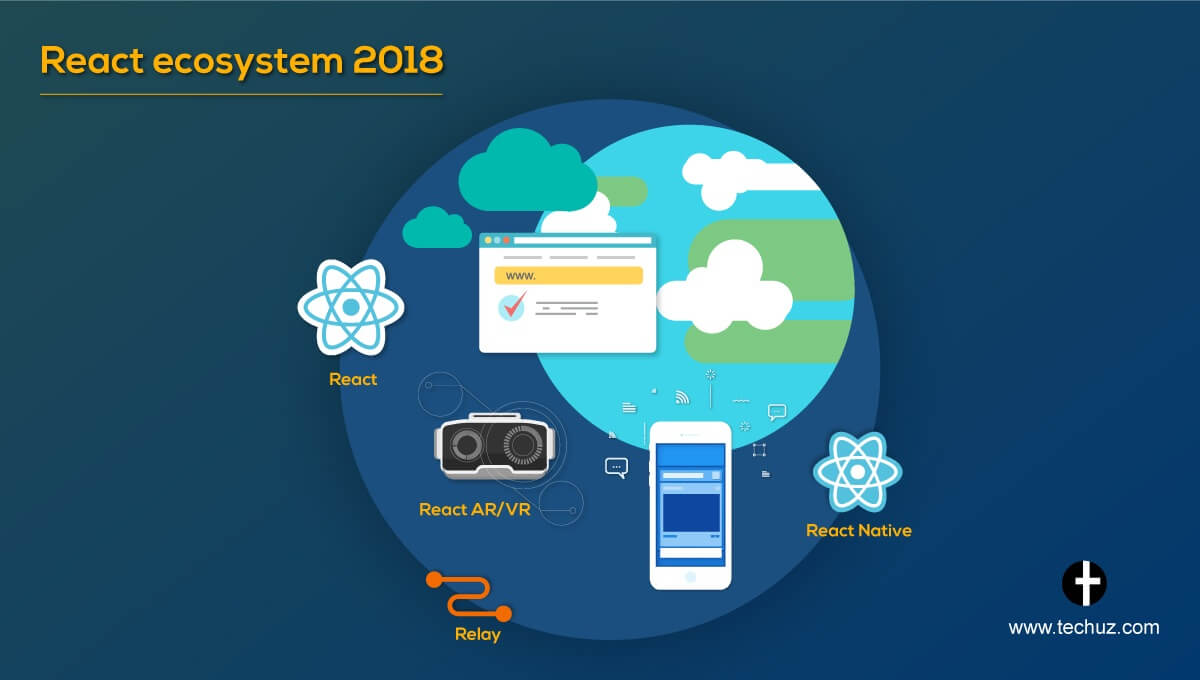 React has already claimed a huge share of the JavaScript market and is still gaining a monumental popularity in 2018.

Thanks to its flexibility and versatile nature that made it a hot favorite “ecosystem”.

You might be wondering, “Hey wait, react as an ecosystem?  I know React is one of the best JavaScript technology to build UIs but an ecosystem, really?”

Well, React is no longer just a library to build user interfaces. It has extended its purview and formed an ecosystem.

React was developed just like many other JavaScript technologies to build swift single page apps and was immensely successful.

However, the developers realized the power of openness and customization can be beneficial for varied devices and technologies. And so, React spread its wings into mobile, VR, and even 3D UIs for gaming.

Let’s dive into its details and understand the React ecosystem.

React is a library for developing interactive user interfaces for web apps. It was developed to create huge web apps where specific events can be rendered instead of a full page refresh. Some of the world-class projects like- Facebook, Instagram, Yahoo!, etc are made using React.

React being Declarative makes it easy to create UIs that updates components when your data changes. The codes are easy to understand and debug.

Virtual DOM is the feature that creates a structured cache in its memory, computes the differences and then updates the browser’s displayed DOM. Thus, programmers are able to write code with each change similar to the entire page render, while the React libraries render the subcomponents that actually change.

We know React is a library, not a framework. So, it lets the developer select the supporting libraries and tools as per the specific needs rather than forcing them to use the default ones as in the frameworks.

React and VR are the two buzzwords trending among developers. When combined it has opened a new dimension to provide a vivid user experience.

VR works on the idea to indulge the user in the app. A huge portion of our brain is dedicated to spatial memories that make the information easier to understand.

Virtual Reality gives a lifelike experience and a sense of togetherness that allows the user to connect with the app in a better way.

WebVR is a JavaScript API for developing 3D Virtual Reality interfaces for the web browser.

It is a set of APIs to create web content using JavaScript and WebGL to render it into VR Headsets.

Prominent web browser companies like Google, Mozilla and Microsoft are working on to integrate the virtual reality in the web browsers for ultimate user experience.

React VR is an open source library to develop User Interfaces and 3D scenes in VR. It is the combination of the expressive and declarative power of React with lower-level WebVR and WebGL.

And the fact that quite fascinating is that it is capable of building lifelike VR UIs with much fewer lines of codes compared to WebGL.

React Native app development is gaining popularity because it allows to develop native-like apps for Android and iOS using JavaScript. If the developer is well versed with Javascript, he can build a sophisticated and fully featured native app without learning Swift or Java.

Whether it be iOS or Android, React Native enables you to develop the native app using just one language, i.e JavaScript.

With React Native you can build your app faster as it lets you reload the app instantly with “Hot Reloading” instead of compiling the code. It even allows you to run the new code while retaining the app state.

React Native easily integrates the third-party plugins. This helps in smoother experience as less memory is utilized. For instance, React Native all you to link a payment gateway plugin with a native module to carry out the payment transaction on the app.

Relay is a framework for creating data-driven React apps. While React helps to build UI declarative, Relay, on the other hand, makes your data declarative using GraphQL. It helps in managing the data more efficiently.

What Relay actually does is that it fetches data from the server and makes it available to use inside the component getting rendered on the screen.

GraphQL is written next to the views that are dependent on them and Relay compiles all the queries generated into network requests.

Relay determines how and when to fetch the data once the data required by the components are declared.

The React ecosystem has indeed made its prominent place in different territories whether it be web, mobile or VR. The versatility and flexibility that changed the way web apps were are now shifting the industry. All these attributes make React an ecosystem for the trending business needs and many startups and business are already on the board.

2017 was the year of React and looking at the trends there is no doubt that it will even dominate in 2018. Hope you are benefited reading it. If you are looking for a React native development company or ReactJS development company that can help you to render the benefits of React in your business, we can be a perfect match for you. We have delivered several web and mobile app development projects to our clients and you can be the next one. Feel free to contact us for inquiries.