Angular vs React vs Vue.js – Which One is Perfect for Your Project? 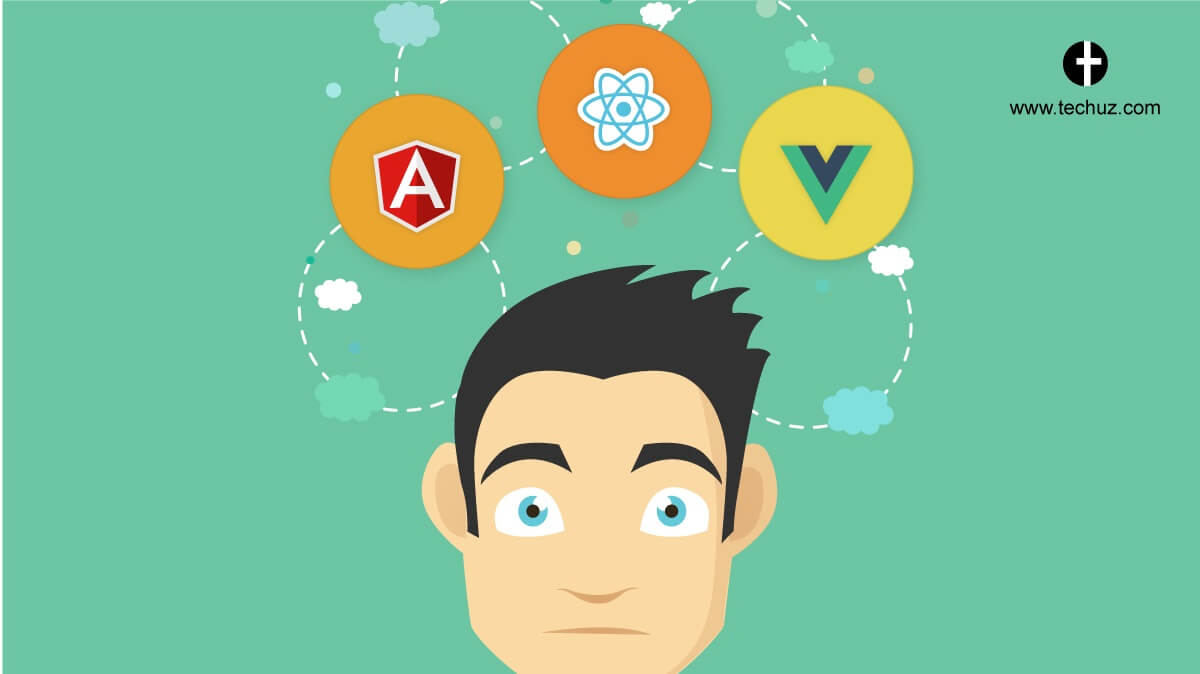 When comparing the ultimates, some questions have generated great controversies throughout the history. Jordan vs LeBron, Ali vs Frazier, Beatles vs Rolling Stone or Chuck Norris vs Bruce Lee. And in the era of JavaScript, the list has added a new conundrum which has become a hot topic for debate. And that is Angular vs React vs Vue.js.

Maybe we are not eligible to pass a judgment on the rest of the comparisons but yes, being in the web and mobile development industry since more than 5 years and delivering 100s of projects to the clients, we can help you to compare the ultimate JavaScript technologies and select the best one for your project.

Before we start the comparison let me say one thing.

All the three technologies viz. Angular, React and Vue.js are widely used by developers all around the globe, they provide similar functionality and each has their own pros and cons. The question shouldn’t be which is the ultimate JavaScript technology but which one will work best for your project and needs.

In this article, we’ll understand each of the JavaScript technologies, their features, utility, popularity and which one will be suitable for your project.

So, let’s begin the comparison.

Angular is known as the superheroic MVC framework. It’s been 7 years since its first release and has been one of the most popular frameworks for building single page applications and other web apps.

With features like two-way data-binding, built-in dependency injection, TypeScript and reusable components it is the prime choice of huge companies for their complex projects. Some of the leading projects made with Angular are PayPal, NetFlix, UpWork, YouTube for PS3 and Weather.com.

AngularJS was originally developed by Miško Hevery in 2009 which is now supported and maintained by Google. It is an open source framework and MIT Licensed that makes it free for commercial or private use as well as allows modification and distribution. 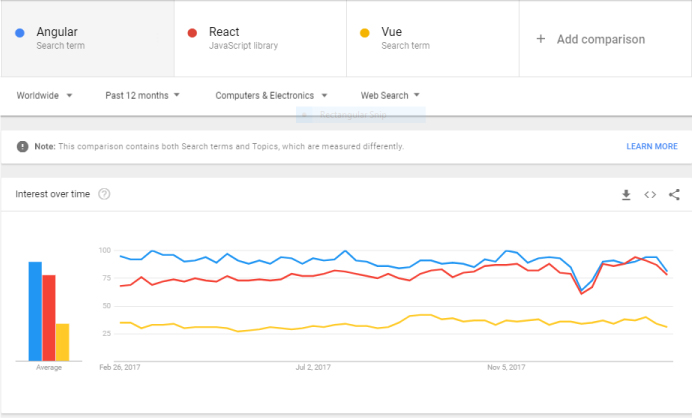 Stats by Built With depicts 0.5% of Quantcast top 10k websites are made with Angular. While the entire internet consists of 8,938 active sites that are made using Angular. 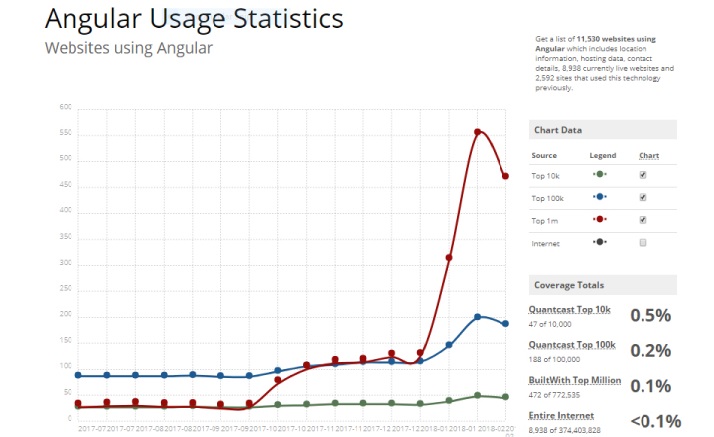 While the number of repository result on Github sums at 342,406.

When to Use Angular?

Web app development using Angular provides reliability, consistency, standardized codes and a huge community support that is a perfect match for enterprise apps. If you are looking for staying with a  technology for a long time, amicable codes, best practice and manage millions of users or even dollars with your app then Angular is the framework that your enterprise may rely on.

Angular is suitable for your project if you need:

React was built to create web apps that can render specific components rather than a full page refresh. This was made possible with the component-based architecture. Today it has extended the purview of possibilities and it is no longer just a library to build the user interface. Many top-notch projects like Facebook, Instagram, Coursera, Yahoo!, etc. are build using React.

React was developed by Facebook and even it manages the ongoing development and updates. Earlier it was under a BSD-derived license that raised issues related to patents and copyrights. But in 2017 Facebook re-licenced React under MIT.

2017 stats by GitHub shows, React Native is the top JavaScript technology project with the most number of contributors (8.8k) followed by Angular-CLI (7.4k) and Angular (6k). 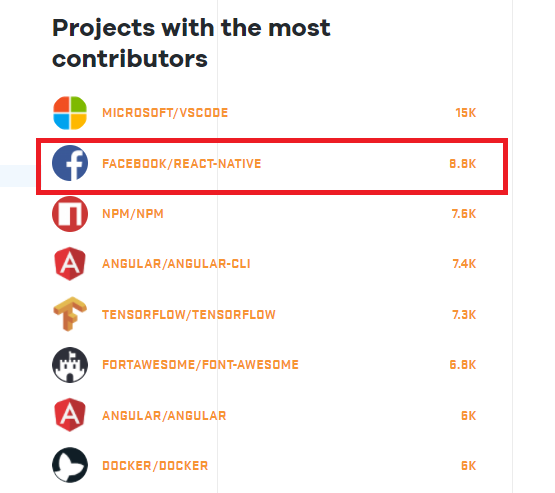 The number of React’s repository on Github is an eye-popping 419,651. 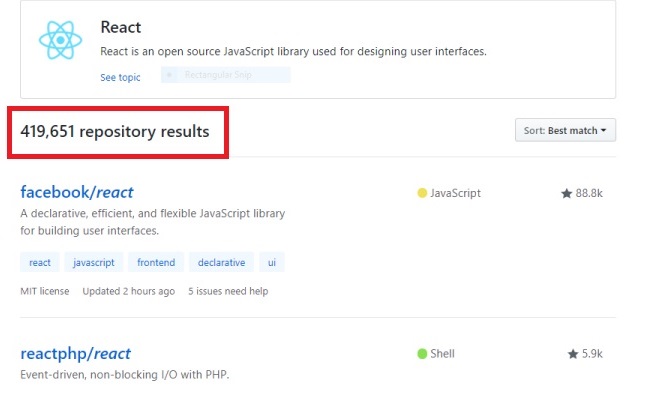 When to Use React?

React is a Javascript library, not a framework. Thus, web app development using React provides you flexibility and freedom rather than confining you to a framework template. So, if you are looking for more flexibility and customization for your project then React is the most suitable for your needs. It is the right choice for most general app development such as productivity apps, single page apps, Progressive Web Apps, mobile apps using React Native, IOT apps with React for IoT and AR/VR apps using React for AR/VR.

React is a perfect technology for your project if you are looking for:

Vue.js is a lightweight progressive framework for creating interactive user interfaces. It is the new player in the game that has been observing its competitors. Just like Angular and React, Vue.js serves similar functionality for building user interfaces for SPAs and other web apps. It provides React-like virtual DOM and can be easily integrated with other libraries too.

The cool part about Vue.js is that it was made adopting the virtues of Angular and React that makes this framework versatile, lightweight and easy to learn. Many multinational behemoths like Expedia, Nintendo and Alibaba are using Vue.js for their projects.

Vue.js was developed by Evan You, an ex-Google employee who worked on several Angular projects. Describing his thought on Vue.js he said, “I figured, what if I could just extract the part that I really liked about Angular and build something really lightweight without all the extra concepts involved?” It is free from any copyright, patent or usage issue as it is MIT licensed.

Vue.js beats Angular and React in the race of “Ten most forked projects” with 8.1k forks according to GitHub, Vue.js is followed by React Native with 8k forks.

Built With shows 0.6% of Quantcast top 10k websites are built using Vue.js. While the entire internet consists of 60,627 active sites that are created using Vue.js. 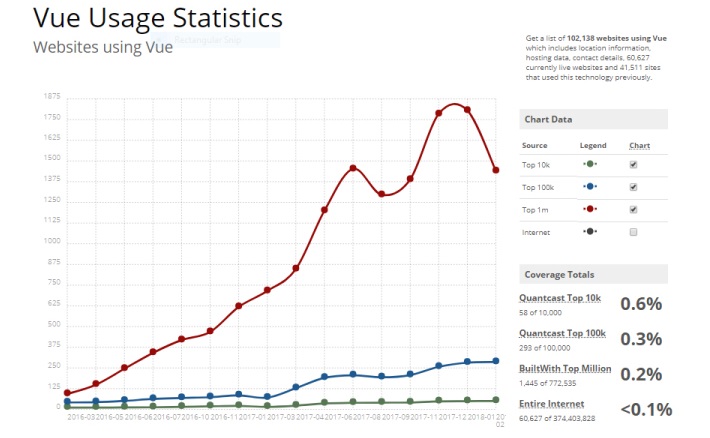 The repository results for Vue.js on GitHub just shows 103,063 repositories. 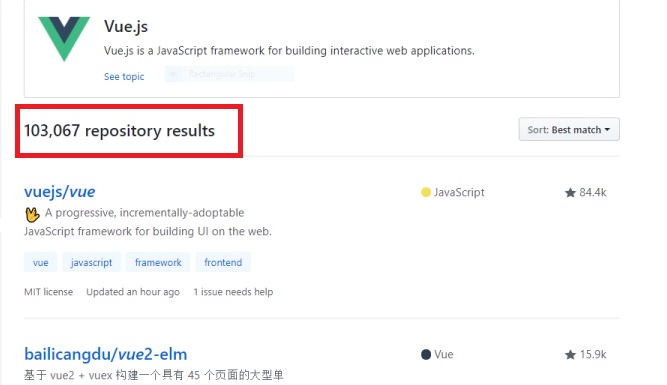 When to Use Vue.js?

The reason why Vue.js is called a progressive JavaScript framework is that it is perfect for small or ongoing projects where you want to add additional feature or functionality. Not only that, web development using Vue.js is proven to be highly scalable and a great choice for single page applications due to its Vuex and Router components.

Vue.js is the perfect Javascript technology for your project if you need:

JavaScript technology is evolving with time to make the applications more interactive, swift and user-friendly. All of the above JavaScript technologies are widely used across the globe for varied projects. None of them is a perfect solution for every project but each of them facilitates unique functionalities according to the situation and project needs. In this way, one select the technology that renders maximum benefits for the project.

Hopefully, this article has given you a brief idea of selecting the Javascript technology suitable for your project. If still, you aren’t sure which framework or library is perfect for you, feel free to contact us for free JavaScript consultancy.